Cookies help us deliver our services. By using our services, you agree to our use of cookies.
به‌اشتراک‌گذاشتن

An Essay on Criticism 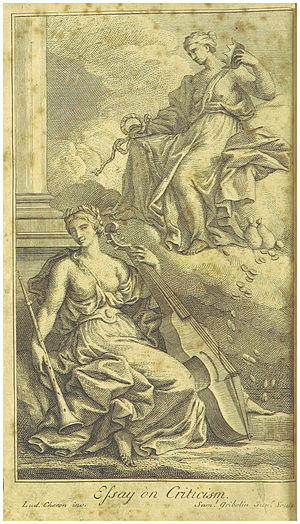 An Essay on Criticism is one of the first major poems written by the English writer Alexander Pope (1688–1744). It is the source of the famous quotations "To err is human, to forgive divine," "A little learning is a dang'rous thing" (frequently misquoted as "A little knowledge is a dang'rous thing"), and "Fools rush in where angels fear to tread." It first appeared in 1711[۱] after having been written in 1709, and it is clear from Pope's correspondence[۲] that many of the poem's ideas had existed in prose form since at least 1706. Composed in heroic couplets (pairs of adjacent rhyming lines of iambic pentameter) and written in the Horatian mode of satire, it is a verse essay primarily concerned with how writers and critics behave in the new literary commerce of Pope's contemporary age. The poem covers a range of good criticism and advice, and represents many of the chief literary ideals of Pope's age.

Pope contends in the poem's opening couplets that bad criticism does greater harm than bad writing:

'Tis hard to say, if greater Want of Skill
Appear in Writing or in Judging ill,
But, of the two, less dang'rous is th' Offence,
To tire our Patience, than mis-lead our Sense
Some few in that, but Numbers err in this,
Ten Censure wrong for one who Writes amiss;
A Fool might once himself alone expose,
Now One in Verse makes many more in Prose. ... (1–8)

And ten low words oft creep in one dull line:
While they ring round the same unvaried chimes,
With sure returns of still expected rhymes;
Wher'er you find "the cooling western breeze",
In the next line, it "whispers through the trees";
If crystal streams "with pleasing murmurs creep",
The reader's threatened (not in vain) with "sleep" ... (347–353)

Throughout the poem, Pope refers to ancient writers such as Virgil, Homer, ارسطو, Horace and Longinus. This is a testament to his belief that the "Imitation of the ancients" is the ultimate standard for taste. Pope also says, "True ease in writing comes from art, not chance, / As those move easiest who have learned to dance" (362–363), meaning poets are made, not born.

As is usual in Pope's poems, the Essay concludes with a reference to Pope himself. Walsh, the last of the critics mentioned, was a mentor and friend of Pope who had died in 1710.

An Essay on Criticism was famously and fiercely attacked by John Dennis, who is mentioned mockingly in the work. Consequently, Dennis also appears in Pope's later satire, The Dunciad.

Part II of An Essay on Criticism includes a famous couplet:

A little learning is a dangerous thing;
Drink deep, or taste not the Pierian spring.

This is in reference to the spring in the Pierian Mountains in Macedonia, sacred to the Muses. The first line of this couplet is often misquoted as "a little knowledge is a dangerous thing".

The Essay also gives this famous line (towards the end of Part II):

To err is human, to forgive divine.

The phrase "fools rush in where angels fear to tread" from Part III has become part of the popular lexicon, and has been used for and in various works.

الگو:Gutenberg (much punctuation is missing)

EV on other languages